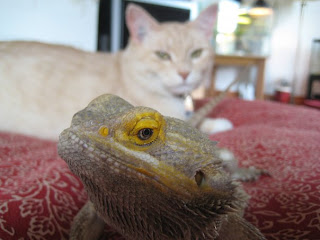 I haven't yet talked about my other kids and I think they deserve their fair shakes on this blog too.  After all, they were here before the Mylo and have put up with going from lavish amounts of attention to virtually none (well not really) since he showed up.

Allow me to introduce Beatrix (Bebe for short) and Ozwald (Ozzie for short).  They are a very fat, orange female cat with a pea-sized head (compared to her body) and a very snugly, most probably partially blind and exceedingly dim-whited bearded dragon, respectively.

As you can see, they hang. They even cuddle.  Bebs does enjoy a good game of chase on the rare occasions that Oz is out of hibernation long enough to scamper around the house.  And yes, when he is awake (approx. 4 months a year) he is generally free to roam, or used to be anyway.  Enter Mylo. 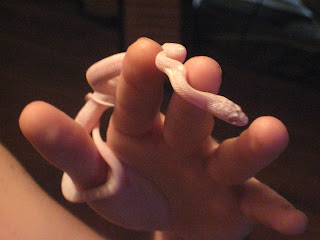 We used to have another little girly in our household too.  She now resides on a lovely island with my nephew and his family.  Baby gurl is an albino corn snake.  We got her as a teeny, tiny little wormy thing, all pink and beautiful with red eyes.  She is awesome and now in and around the 4- 4 1/2 foot mark.  We made the executive decision to gift her to Finn (the nephew) as we realized we just had way too much on the go in terms of other beings to take care of.  It's cool, we still get to see her when we go visit.

Let me now get to the meat of this post.  I have a small problem.  One which I am certain Mylo will take major issue with in years to come.  Thankfully the animals don't know or care or, if they do, they aren't saying.  It's my 'pet' names. And by pet names, I mean terms of endearment and, I suppose in this case, coincidentally, also the names I call my pets (and kid).

Inexplicably, they all seem to have something to do with bodily excretions.  I know, totally gross and weird, I'm not denying it.   For example, the lizard has long been referred to as Poo Poo boy, in fact I think that is pretty much his given name now.  Then Bebe came along and somehow she has been christened Pee Pee Girl.   I'm talking like this is what we call these poor animals every day.  Again, they don't seem terribly bothered.  I guess we can likely get away with this new nomenclature for the animals permanently...but what about for Mylo?

It's true, a largish selection of our pet names for him also have something to do with poo.  I'm not going to get into them, for fear of irreparably scarring my child in the future, but suffice it to say, I had better start working on some more appropriate names, pronto.  Seriously, am I the only one? Tell me there are more of you wierdos out there who have a passing preoccupation with poop.  No?  Ok, it's official, I'm a freak.  My poor kids. Only love.

Email ThisBlogThis!Share to TwitterShare to FacebookShare to Pinterest
Labels: `