Pra Somchai and his 'special babies'

I've been thinking a lot about Mylo and how he came to be who he is.  I go through stages of beating myself up for passing on genetic material that has in some ways, let him down.  I wonder if it was something I did or didn't do when I was pregnant with him.  After all, my pregnancy from 21 weeks on was an exercise in pure agony for everyone involved.  I know that in a muted way, babies, in the comfort of the womb, experience and understand all that their mothers feel, hear, live.  And so, I sometimes sit and wonder if the trauma Mylo endured before even making his grand entrance and that which he surely experienced in labour and delivery, laid the groundwork for the solitary, mysterious world Mylo now calls his own.  I will likely never know. What I do know is that in at least one strange way, Mylo was pre-destined for Rogan and I.

In 2008, Rogan went to Thailand with his best friend.  They went to travel and island hop and Rogan also carried on to visit his mom who lives in Chang Mai.  I tried to tag along, but at the time, work was very busy and I couldn't quite make it happen.  Sadly, I have still not been and don't see it happening in the foreseeable future.  24+ hours of travel with an autistic toddler?  Akin to many sharp sticks in many eyes.  I need a good few more years of skin-thickening to attempt that. 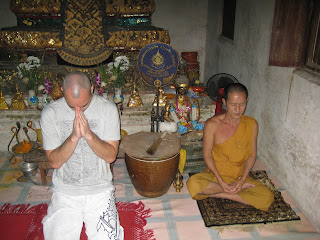 One of R's adventures took him to a small temple atop a mountain on the island of Koh Pangan.  They found it accidentally and met the monk who lived and 'worked' there.  According to Rogan, Pra Somchai was a 60 something, chain-smoking, cat loving dude, who had a cell phone so he could receive text messages. It seems that Pra Somchai had a very important purpose in life and was revered and sought out by people around the world (his big claim to fame was that he was the personal monk to the lead singer of Jamiroquai...I know, could it be any weirder?)   Pra Somchai's purpose was to provide 'special babies' to those who visited him.  It seems that he would bless them and work his monk-y magic (no disrespect intended) and a special baby would be created.  Women with infertility came to him from all over and according to him, his success rate was very high. Alrighty then.

Now, to be clear, R and I were not in the market for a baby at that point in our relationship, no sir, but Pra Somchai insisted R receive his blessing in the form of a woven bracelet around his right wrist. He told him that the bracelet and the blessing would provide R with a very 'special baby' when the time was right.  He also told him that the bracelet would fall off when it's work was done.  Two things:  1) It has not yet fallen off.  2) most days I get down on my knees and thank Pra Somchai for keeping his promise and sending us the most incredible baby boy who teaches us, shapes us, and helps us understand a whole new reality.  And other days, I just want to haul off and kick that monk in the nuts and yell, Autism was NOT the kind of 'special' we had in mind. Does that make me a bad person?  I hope not.
Posted by Kate at 21:23