How to fool a lazy liver with artificial exercise

And so, here I am at the beginning of another new adventure, the mysterious world of blogging.  I feel like I've been at the beginning of so many new adventures in the last few years, that I have been hesitant to add anything else to the ever growing list of things that I should be doing.  I've been pondering a blog of my own for some time and have been following some awesome and inspirational peeps on their blogs to get a feel for it.  Last week I suddenly felt like I was ready.  So here I am.  Now what? 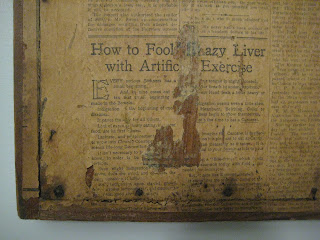 I digress.....first of all, the title to this first post has nothing to do with anything.  It is the title of a newspaper article from a Vancouver newspaper article printed in 1902.  I have the sheet of newspaper mounted and hung on my bathroom wall.  There are many ridiculously funny articles, but as I sit perched on the throne, this is the one that always recaptures my attention and makes me chuckle.  The article underneath is so old and worn, that I really have no idea what the title could possibly mean.....I can make out something about bowels and indigestion but prefer to just imagine a liver being carried around on a bicycle or something.

This week has been a particularly rough one for us.  We are in the middle of Mylo's private autism assessment, which means we are paying an ungodly amount of money for three specialists (a developmental Pediatrician, a child psychologist and a speech pathologist) to assess M's development and determine if he falls on the spectrum.  Now M is as young as one can be to be granted a diagnosis in Canada and honestly, from what we have seen, the criteria for assessment in wee ones is sorely lacking (but they sure don't consider that in their final bill).  All the tests and questionnaires are for kids between 0-5 and really, about 95% of the questions don't even apply to a toddler of 18 months.  Having said that, in the two appointments we have had thus far, the info. we have been given on his development (or lack there of) has also served to break our hearts a little more.  We have already been given the unofficial diagnosis of classical autism and global developmental delay and will get our official diagnosis and funding paperwork on Feb 3.  We have known this was coming for some time, but to say that it doesn't rip our guts out, would be a total fabrication.

I'm not one of these moms that is going to sugar coat his diagnosis and say, I wouldn't change him for the world or autism is a gift from God.  Nope, not me.  I think autism sucks.  If I could keep all other aspects of my boy and banish his autism, then I would happily do it in a second.  I want him to communicate, I want him to want to play with toys, I want him be less frustrated, I want him to interact with people instead of ignoring them completely.  I don't want these things only for him but for us too.  That may seem selfish or too real for some people, but dammit, I want my kid to experience life and I want to watch him do it.  R and I plan to unleash the hounds and access every resource possible for M.  We will get on every wait list, go to every workshop and support group, even if it is has absolutely nothing what so ever to do with autism (obviously not).  Kinda like Fight Club, but not really.

I think I'll end my very first blog post with a cute little story about the fine young boy we are proud to call our son.  Obviously, as he is only 18 months, M is still in diapers.  We cloth diaper and I like to let his dangley bits breathe as much as possible, which means, I let him run amok sans diaper often....perhaps too often?  No biggie, we have wood floors and what's a little pee here and there.  It can all be cleaned.  Well, the boy also seems to enjoy the odd poop while in the buff.  It happens.  What is so fantastic about M though is that he has a very special place he likes to leave his mark.  Our coffee table.  Picture it, adorable little pork chop, perched on our lovely antique coffee table in a squat, watching baby Einstein.  We turn our backs for a second and hear this awesome grunt.  As you can imagine, we laughed for a good long while at the result.  The best part is, it happened again today, just when I needed some comic relief the most.  I'd say this is probably the 5th or 6th time he's done it (including in front of company...that was the time he also peed on dads xbox!  Awesome!).  Apparently we don't learn very quickly!  :)
Posted by Kate at 17:06