And now for something completely different.

R and I moved into our condo just over a year ago. Although we did some work before moving in (floors, paint, general clean up), we always have at least a dozen ideas bouncing around in our pea brains of fun stuff (renos) we would like to undertake.

The vast majority of them are pipe dreams, as we just don't have the cake to make all our 'pretty' home dreams come true.  But, we have learned to become masters of craigslist and the supreme masters of the illusive 'deal'.  We start obsessing on whatever idea has caught our fancy and then we see just how cheaply we can make it happen.  If it is cheap enough, we go for it and if not, then it's tucked away in our little book of unrealized reno dreams (I promise we don't really have one these), and it's on to the next.

The last few months have seen us (that would be the royal 'us') actually DO some of these renos.  So fun.  We found a crazy deal on a new kitchen sink and a half way decent price on a sleek new faucet and then we sat on them for months.  You see, as much as I want to believe I am handy, when you get right down to it, I should not be allowed near power tools (or anything involving math, strategic planning or problem solving).  period.  They all do such wonderful things, and I love the shit out of them, but the reality is, they don't love me back.  I am a born accident waiting to happen and I lack the patience to take it slow and easy.  This all equals disasters, injuries and botched jobs.  So, I have graciously (not super graciously) admitted that R should be left to handle the technical type stuff. 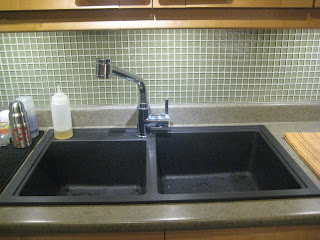 A little background.  Rogan is a computer guy, but he is also ridiculously artistic and creative so my thinking is, he utilizes both sides of that brain of his pretty well.  R had never really done any home renos until we bought this place and though he was excited to give it a go, he was also a little hesitant.  It is much scarier to test the waters in your own pool than someone else's if you get my meaning.  Anyway, that was also partially why the sink sat unloved for so long.  R wanted to do the plumbing himself and it took a while for him to feel like he could do the job well.  I knew he'd rock it, but we all move at our own pace and find our confidence when the time is right.

Long story short, he did it, the plumbing is first rate and the whole thing looks amazing.  So proud. He has also built some kick ass shelves in our laundry room and his most recent bit of total awesomeness is the tiling in our kitchen.

I've been talking about a backsplash in our kitchen pretty much since we moved in but it was not a top priority as we do lead a pretty insane life on a daily basis.  A few weeks ago R and I were talking about the backsplash again and that night I took a little look see on craigslist. Low and behold I found the most outrageous deal on really beautiful glass tile.  We were smitten.  We went to see the dude and he had some other tile which we knew would be perfect for our shower.   We talked him down on price even further and voila....a new project was born. 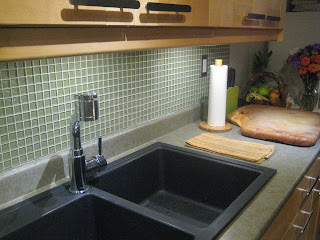 R has now done about 75% of the kitchen backsplash and it is more RAD than we anticipated.  He readily admits that though he is enjoying it, tiling is not the love of his life.  R is a perfectionist, to a ridiculous degree, and finicky little 1X1 tiles are not terribly forgiving.  Once you place them, there is no going back, so you have to get it right the first time.  This makes for a cranky perfectionist.  Despite his stress and fretting, he has done a beautiful job.  We are both super stoked.

I will leave the story of the shower for another time, firstly because that project has not been started and secondly because in our haste to get such a great deal on the tiles, we failed to properly research just what ripping out all the tiles in your only shower entails. We are now well aware that it is going to be a difficult, messy, stressful, long and arduous process that will leave 3 stinky unbathed people in it's wake until completion.  Should make for a good blog post.  Stay tuned.  :)

Oh and just in case you think I never get my hands dirty around here, I'll have you know, I do all the painting, cleaning, organizing, decorating and supervising (not really), so there.  :P  Only love.
Posted by Kate at 21:12