an update. with a side of raw.

What did I imagine in those hazy years before parenting, before autism, before this new life was thrust upon me?  Probably the same as all of you imagined.  Giving birth to a chubby little person, nurturing them, loving them, watching them grow, being excited for every new (and expected) thing they learned or did.  In my mind it was all mapped out, it would unfold just as it should.  And, it has.

No, this life is not one I would have chosen, if someone had given me the choice. But there it is, we weren't given a choice.  What we were given, was a little boy who's whole world is unique, from the way he perceives light and sound and touch, to the way he interacts with his environment and those in it.  What we were given was our son, we were handed our hearts.

What we WEREN'T given was a guide book, a rule book, a stick by which to measure progress, regression, sadness, heartache and break, anger, or uncertainty.   Here I am, over a year since my last post and I am still almost utterly adrift in a sea of 'holy shit, this is my life?!' and 'holy fuck, I have no idea what I am doing, or how I can keep on doing it!'.  But every day, I wake up, or am still awake, as the case may be, I put my ASD mommy panties on and forge ahead.

What's happened in the last year?  SO DAMN MUCH and SO DAMN LITTLE.

Mylo has now been doing his ABA therapy for about a year and a half.  Sadly, for the first 8 months or so, we were caught in the trap of the center based approach.   It was not a great experience (with the exception of our beloved BI Jen, who has only just left us last week, insert sniffle) but we were so uneducated, scared and emotionally raw that it was the best decision for us at the time.   In December, we wised up and realized that building our own team was really the only way to have the control over both our people and our budget, even though it meant a massive amount of work for us.  We now have 6 people working with/for us on our ABA team, which translates these days into 1-2 hour sessions daily from Monday to Saturday and starting next week, we'll be adding in double sessions on 2 of those days and a morning of pre school.  On top of all that, we have his weekly OT, Naturopath and chiropractic appts outside of the house.  I am officially my kids' chauffeur, just not in the way I had envisioned.

So what does all this mean?  Does this mean that Mylo is flourishing, sailing through his therapy, talking up a storm, playing with other kids, calling me mom?  Yes to flourishing, No to the rest.

I think it must be hard for any parent to see the daily, weekly or even monthly changes in their kids, and the same holds true for me.  I know Mylo is changing and growing and making huge gains, but some days I have my autism coloured glasses on and everything looks pretty shit.

Today, at 3 years and 2 months, Mylo remains entirely non-verbal.  Non-verbal for us doesn't mean he has some words but no full sentences or that he will echo what we say. For us it means that he has no words at all.  Not even mama.  The good news is, we have seen huge progress in his ability to imitate sounds and he can be pretty chatty with the ones he does have. :)

Mylo doesn't play with other kids, Mylo doesn't play with anyone really.   He is a sensory being, fueled by the need for input from his environment, much like we all are, only hugely amplified.  He spends his days self-stimulating (stimming) with sounds, sights, touch and taste.  It's not a world we yet understand and not one that makes our boy happy all the time, but Rogan and I spend every second of every day trying to make this world a place he can one day feel comfortable in. 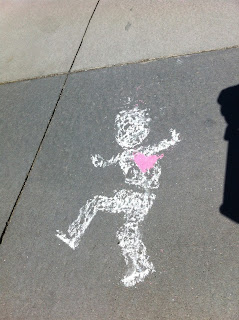 There is so much more to say, but I think this sums up the gap for the moment.  Our life is hard, but it's also so incredibly full of wonder and joy at the smallest detail, the smallest achievement.  I'm not sure that is something that every parent can truthfully say, that they live in the mirco.  We live and love there.  Till next time. Only love.
Posted by Kate at 19:51